Musicians Synergy WSA presents a project in partnership with JazzDay Germany to promote multiple artists and share all the great material of them, creating a musicians synergy into the world community. To start with the project, we want to introduce you the great Uruguayan double bass player: Antonino Restuccia. 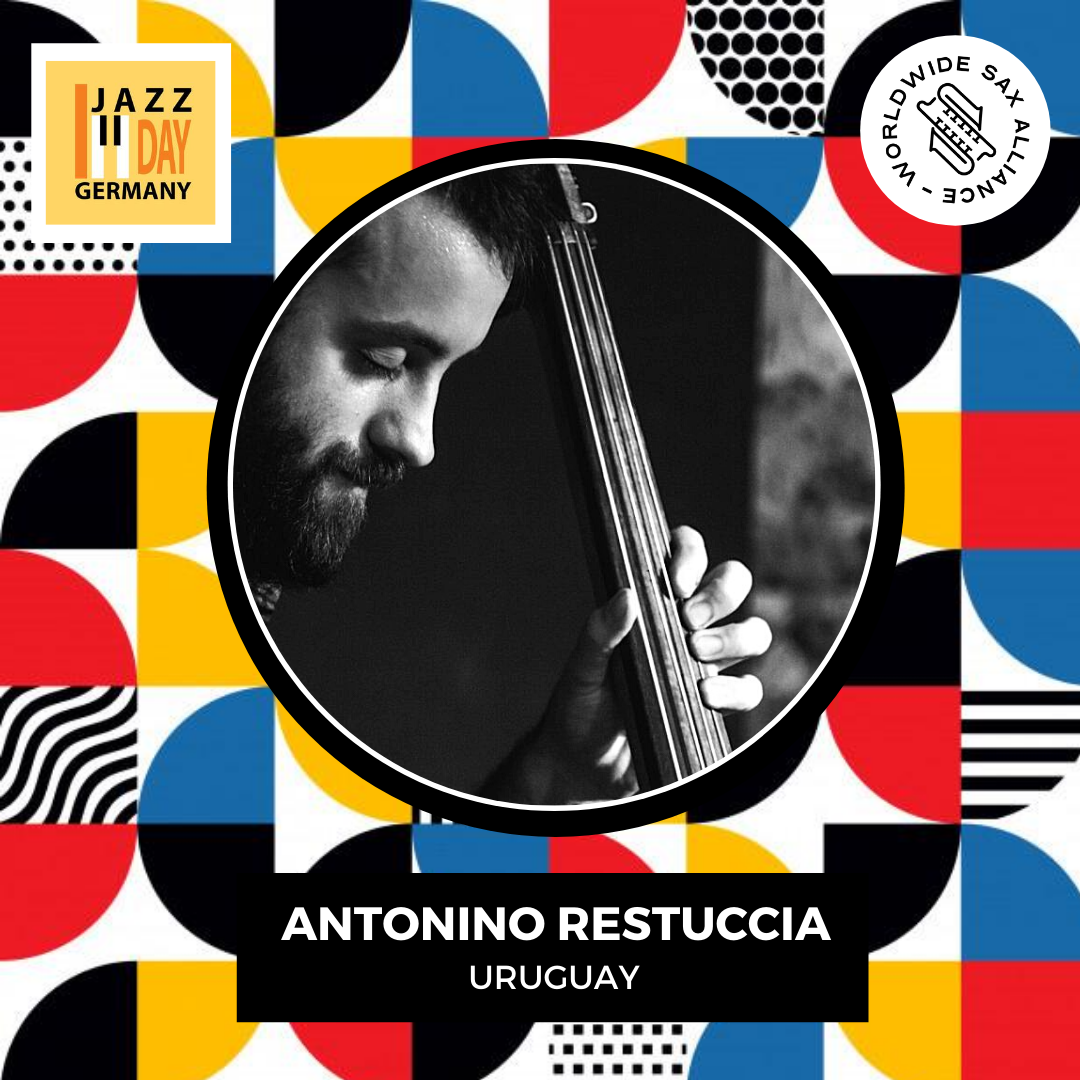 Antonino Restuccia is a double bassist, bassist and composer, born in Montevideo, Uruguay. He has released “La Búsqueda de la Escencia” (2012), “Océano” (2016), “Otro Camino” (2020) as leader, composer, and has recorded on more than 30 albums as a collaborator. He has performed concerts and tours in Uruguay, Argentina, Brazil, Chile, Ecuador, Spain, France, Germany, Holland, Switzerland and the United States. He has worked alongside referents of uruguayan music such as Jose Reinoso, Hugo Fattoruso, Osvaldo Fattoruso, Jorge Trasante, Alberto Magnone, Hector Bingert, Nicolas Ibarburu, Claudio Taddei, Cuareim 1080, among many others. At the international level he has participated as a double bass player for Yotam Silberstein (ISR), Susana Santos Silva (POR), Ed Neumeister (USA), Raynald Colom (ESP), Faiz Lamouri (FRA) among others. He currently resides in Barcelona, ​​where he actively participates in the city's music scene. 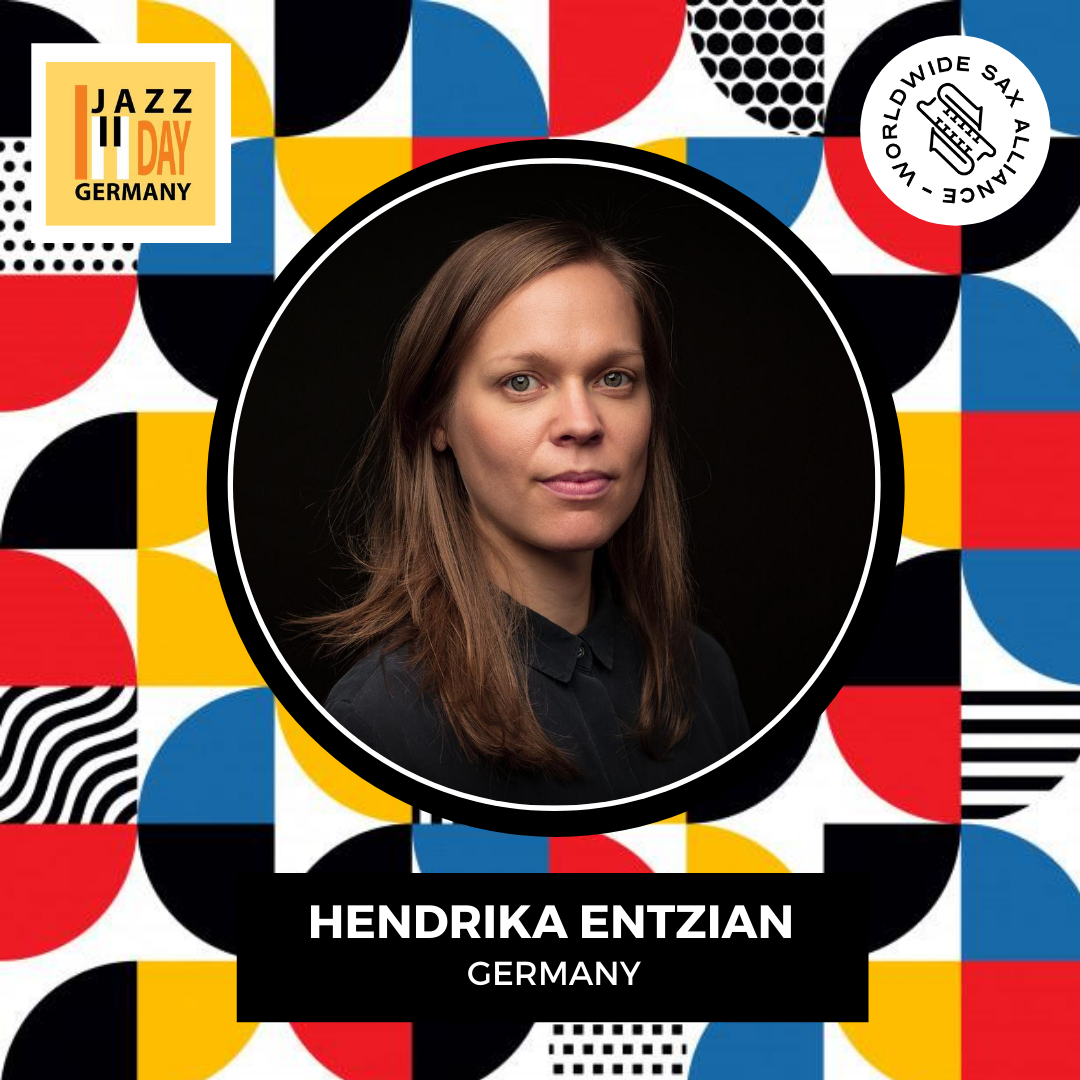 Hendrika Entzian studied double bass in Hamburg, then from 2009 in Cologne. In addition to her participation in various projects in Cologne, she increasingly focused on composition and subsequently completed a master's degree in jazz arrangement and composition in Cologne. She regularly writes and arranges for large ensembles such as the Cologne Subway Jazz Orchestra. Her composition "Weekdays" was included in the program "Zukunftsmusik" at the BujazzO Composition Competition 2016. Since January 2012, Hendrika Entzian has been working in her quartet with saxophonist Maxi Jagow (for whom Matthew Halpin substituted in 2016) as well as Simon Seidl (piano) and Fabian Arends (drums). In 2014 she won 3rd prize at the Hansjürg Hensler Jazz Competition. Her composition "Krance" reached the finals of the Katowice International Composition Competition. She also received a jazz/pop scholarship for female musicians at the Hochschule für Musik und Tanz Köln. In autumn 2017, Hendrika was invited to participate in the Arrangers Workshop of the Dutch Metropolis Orkest and to write an arrangement for guest soloist Kandace Springs. In the same year, she was awarded the WDR Jazz Prize 2018 in the category Composition. 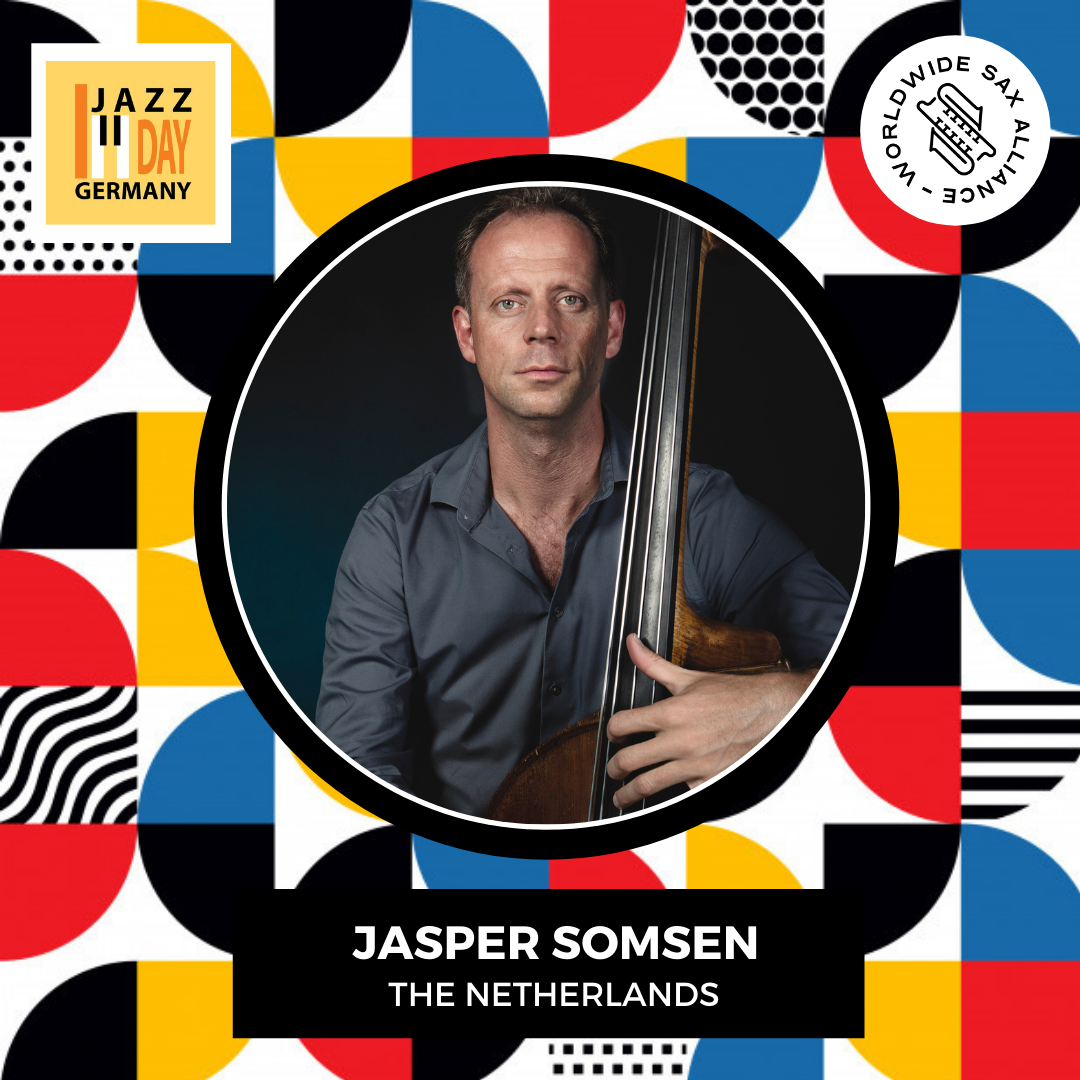 Besides a performer, Jasper Somsen is a renowned studio producer. Being both the bassist and/or producer he was responsible for the latest highly acclaimed albums by Enrico Pieranunzi, Bob Sheppard, Lynne Arriale and Jean-Michel Pilc for Challenge Records International. As a leader he released “Dreams, Thoughts & Poetry” (The Music of Enrico Pieranunzi – 2010), “Sardegna” (2013) and the albums “A New Episode In Life, part I & II” (2017).

Jasper performes world wide and can be heard on more than 40 albums. Outside a busy playing and studio producing schedule, Jasper divides his time between composing and teaching. Since 2001 he live performed and recorded many film music scores. 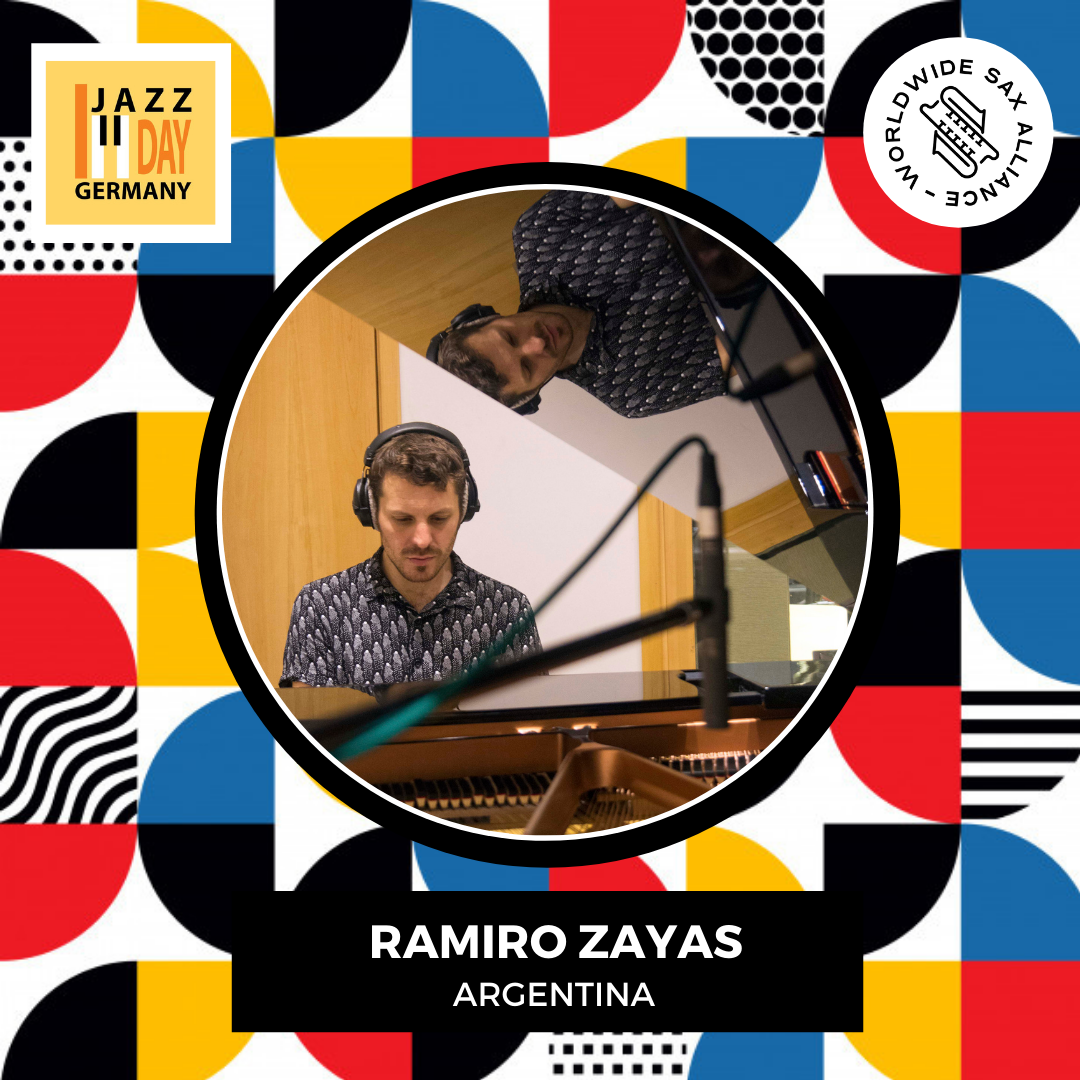 Ramiro Zayas is an Argentinian pianist and composer, now based in Berlin. Studied with Guillermo Klein, Enrique Norris, Ernesto Jodos, Malena Levin , among others. "Rio Interior" is the name of his first album, released in 2019 by Club del Disco and recorded with young and talented musicians from the Buenos Aires Jazz scene like Camila Nebbia, Lucia Boffo, Pablo Passini, Hernan Cassibba and Omar Menendez. He has also collaborated in several projects as Big Nant, Anonimous Big Band, Tundra, Mingunos, Lucia Boffo Trio, among others, and performed in several clubs and festivals in Argentina, Uruguay, Germany and Italy. 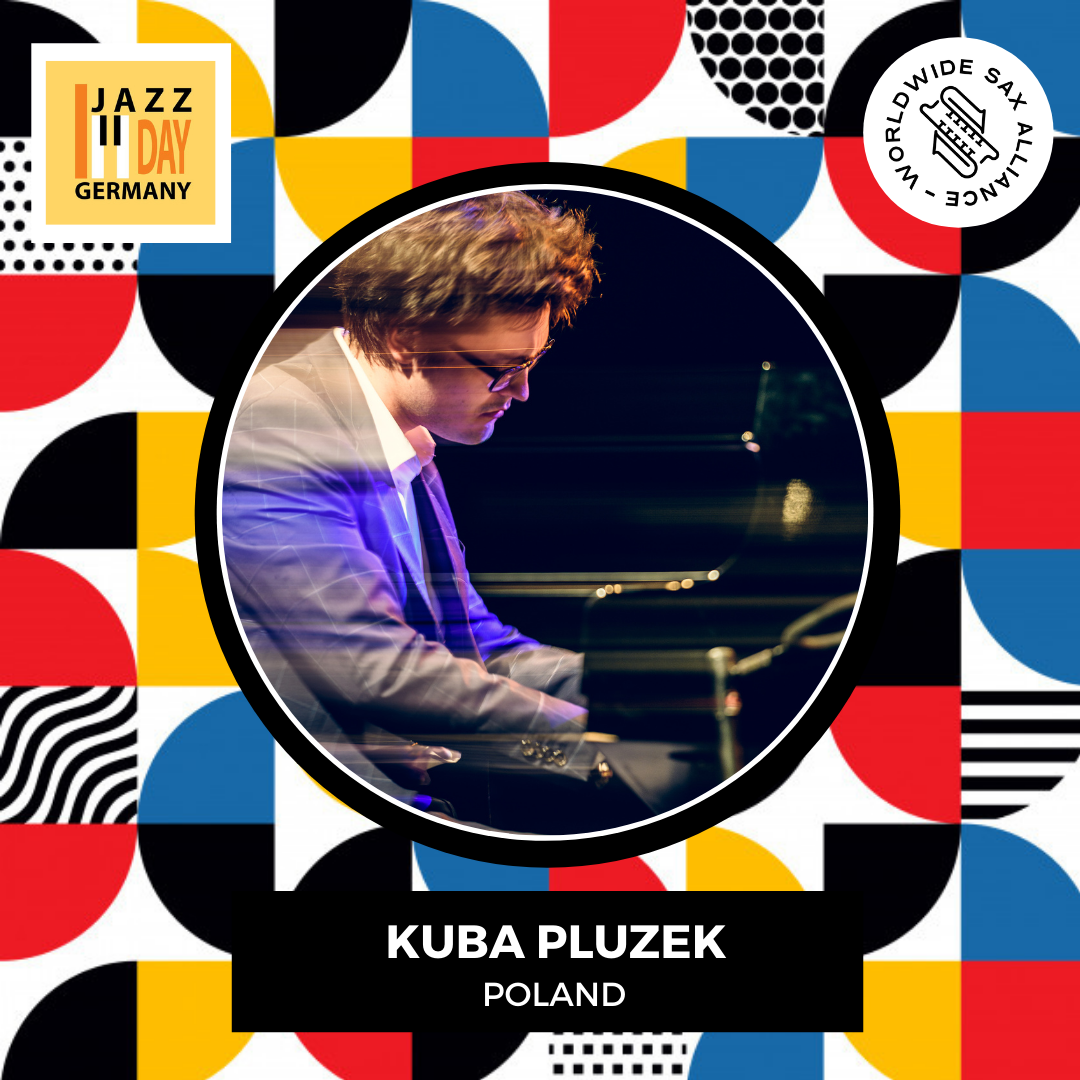 Kuba Płużek is a Polish jazz musician. Born 1988, in Krakow, he studied at the Katowice Academy of Music, in the Jazz and Popular Music Department.  He is one of the most talented and creative instrumentalists on the Polish jazz scene. His creativity characterized by a wide-ranging musical imagination, absolute control of his instrument, and electrifying power of expression.   A provocative spirit in the musical world, with a bold virtuosity, whose intriguing compositions are rich with diffuse and fragmented phrasing, he balances harmonic coherence on a fine line with sensitivity, and opens a world of true jazz of the highest grade before the listener.   A finalist at the Montreux Piano Competition, he's won or been a finalist at many jazz competitions in Poland and international jazz competitions. 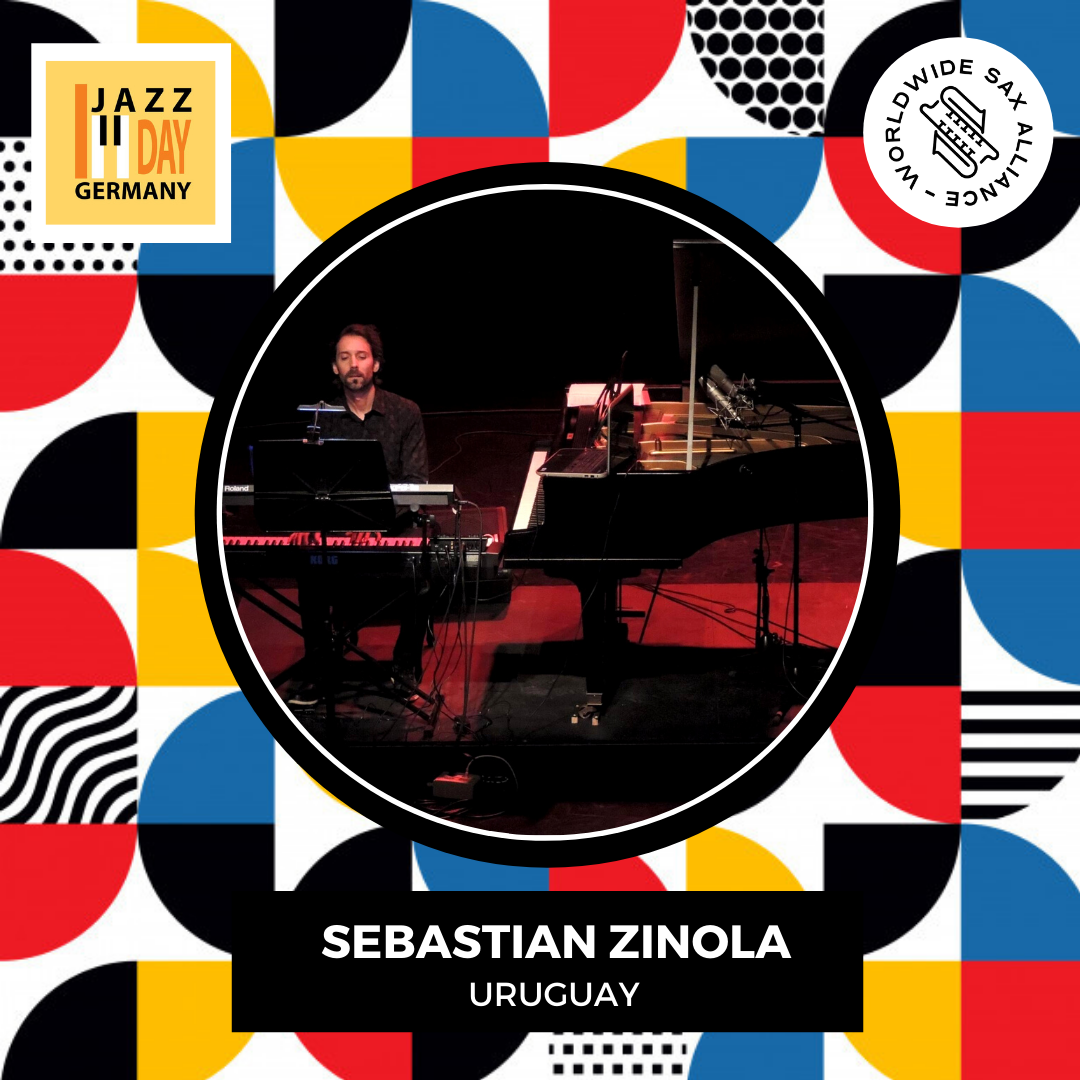 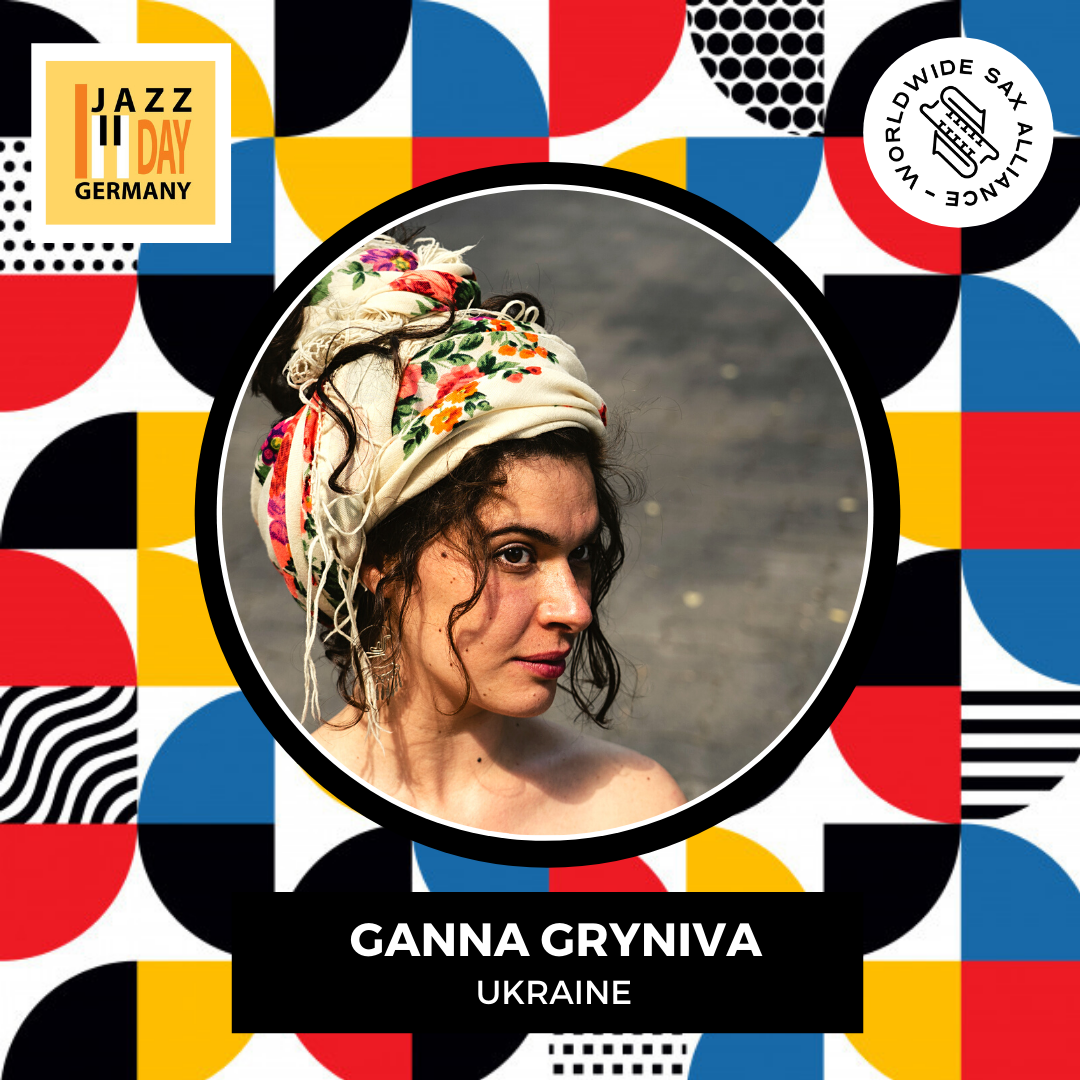 Ganna Gryniva is a singer, songwriter, and pianist. In search of her own voice in contemporary music, she is active as a bandleader, secondary woman, interdisciplinary performer, and free improvisational artist. The main focus of her life and work is in Berlin. Growing up in Ukraine and Germany, Ganna looks for ways to express her different cultural roots. Her work as a bandleader and songwriter combines musical worlds from jazz to Ukrainian folk, and classical and experimental music. Ganna performs regularly with various ensembles and her own projects, such as Ukrainian ethno-jazz quintet GANNA, the free improvisation duo JOGA, as singer of the international Kenneth Dahl Knudsen Modern Lyric Orchestra, with INTERLINK Music & Dance -Performance with Loop Station and Effects. One of the most recent moments is the collaboration with Kurt Rosenwinkel and his label Heartcore Records: Ganna arranged and sang the song “Spivanka” for the label's annual project “Heartcore for the World”. 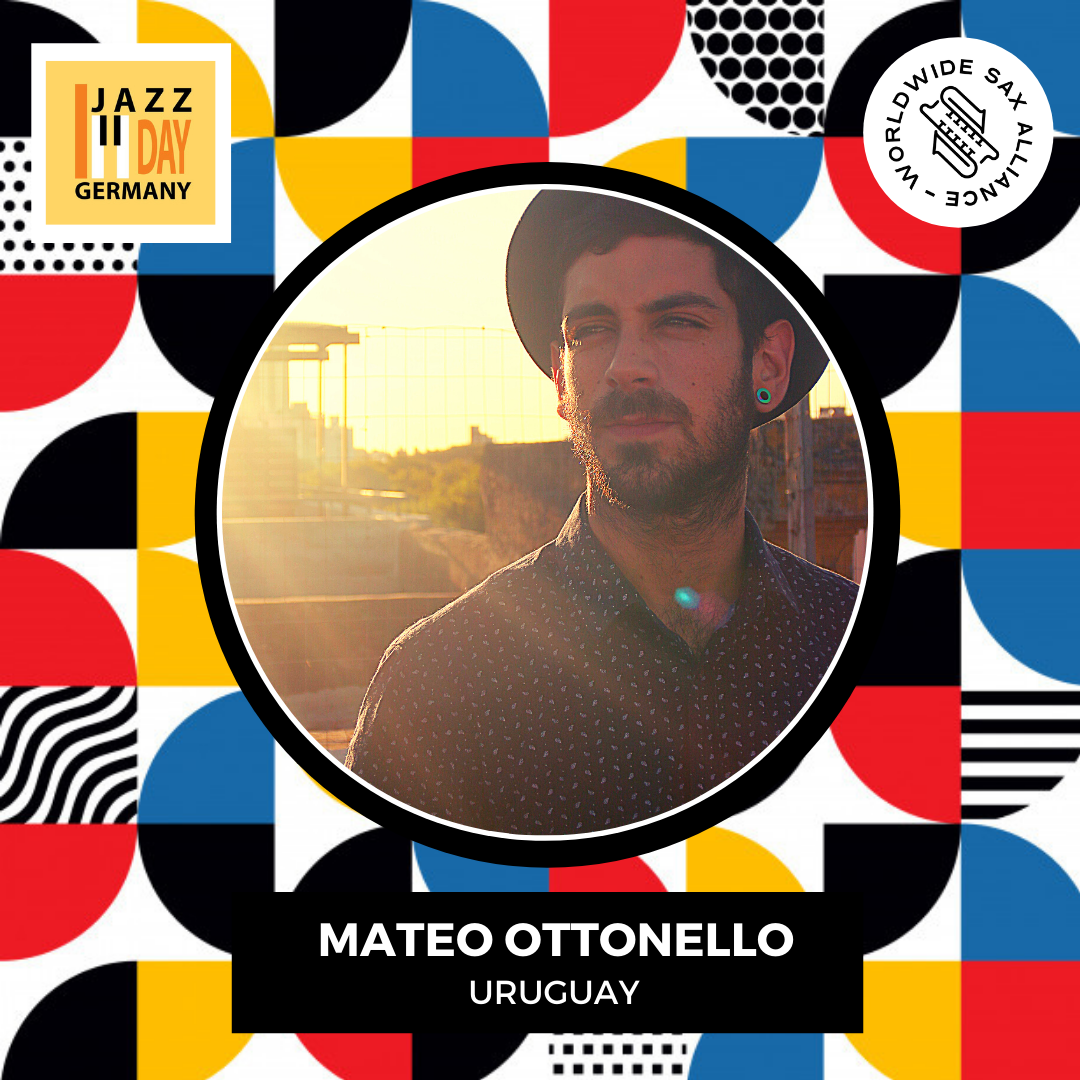 Mateo Ottonello is part of the young scene of Uruguayan jazzists but also, he develop pop, and rock music. He has played with important musicians such as Hugo Fattoruso, Urbano Moraes, Julieta Rada, Alfonsina, Patricio Carpossi (ARG), Andrés Bedó, Hector “Fino” Bingert, Diego Goldzstein, Francisco Fattorusso, Daniel Drexler, Alejandro Luzardo y La Candombera, Cuatro Pesos de Propina, Hernán Jacinto (ARG), Matías Méndez (ARG), Claudio Taddei, among many others. He has participated several times in the “Montevideo Jazz Festival” and some editions of the JazzTour program, as well at “Jazz a la calle Festival” (Mercedes, UY). Currently, he lead his own group with music from his authorship that mixes the strong influence of candombe, with jazz and even from rock, and he is also part of the band of “Meteoro”, Lucía Ferreira and “El combo Candombero”. 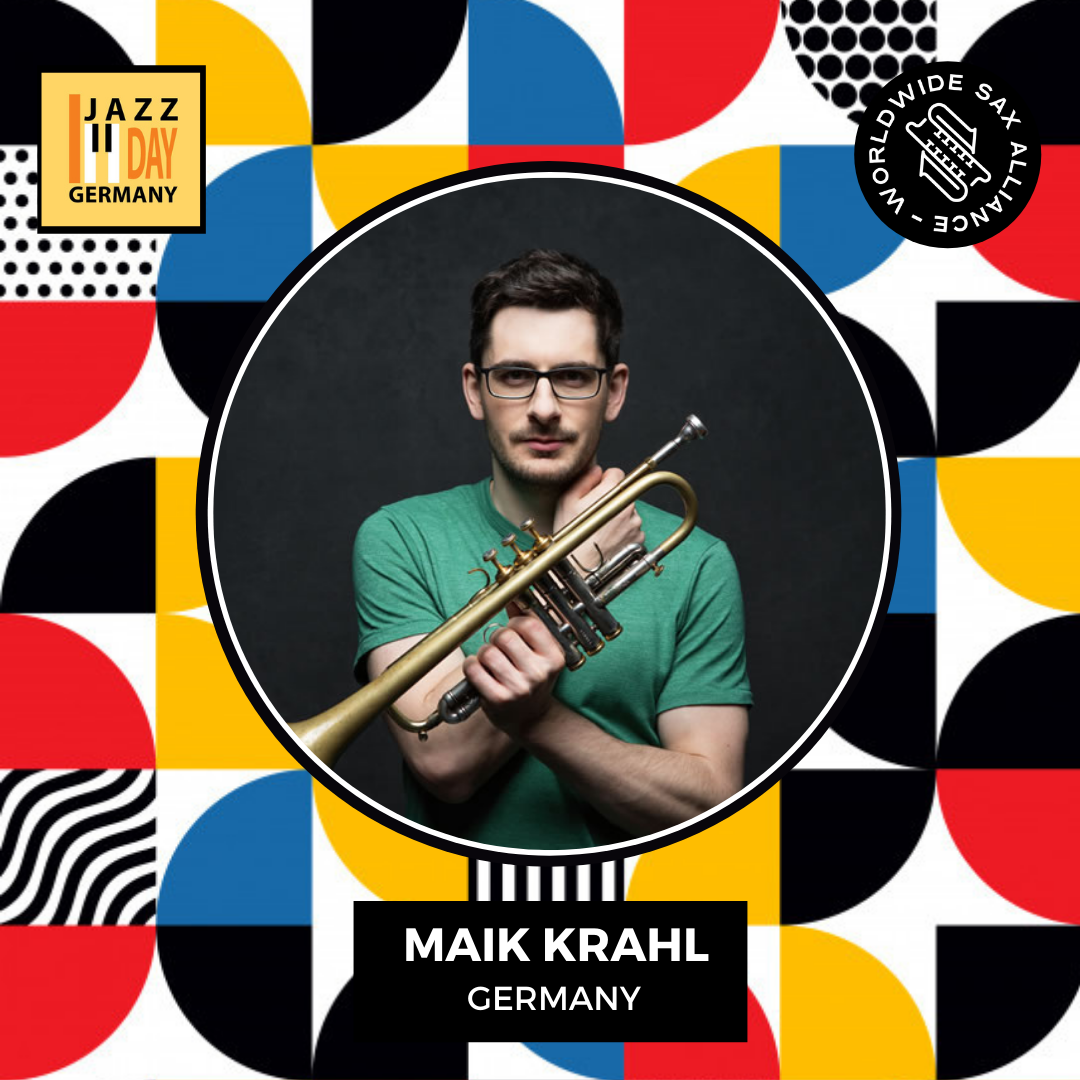 Maik Krahl is a German jazz musician. Born in 1991 in Bautzen, Maik started playing the trumpet at an early age of being just eight years old. After studying Jazz at the Carl Maria von Weber Hochschule in Dresden, he started a Master of Music Jazz Improvising Artist at the Folkwang Universität der Künste Essen. His most influencing teachers were Till Brönner, Malte Burba and the American Jazz trumpet player Ryan Carniaux.. Besides playing with his own band, you can hear Krahl regularly with the quintet Unit 5, which won the Jazzstipendium jazz@undesigned in 2018. Furthermore, he is a steady part of the Subway Jazz Orchestra in Cologne. With this big band he recorded three albums—Primal Scream (2015), State of Mind (2016), and Richbeck Suite (2018)—so far. His current album "Fraction" was released by Challenge Records in 2020. Concerts brought him to Greece, Guinea-Bissau, Canada, Croatia, Lithuania, Austria, Senegal, and the US. Traveling the world allowed him to work with musicians like John Clayton, Kurt Elling, Herb Geller, Benny Green, Jeff Hamilton, Ingrid Jensen, John Ruocco, and Jiggs Whigham. Besides working as an artist, Maik Krahl teaches trumpet at the Offenen Jazz Haus Schule in Cologne. 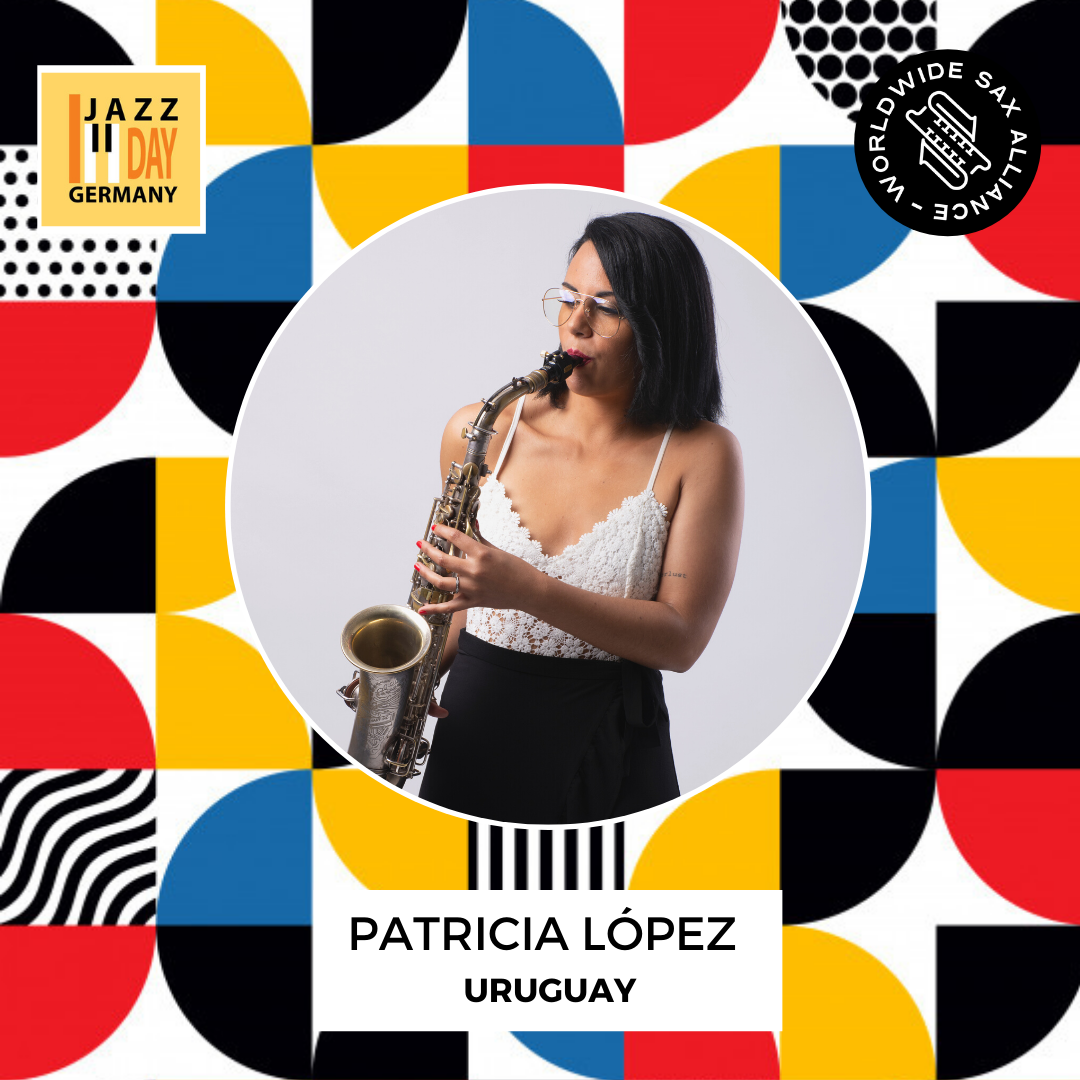 Patricia López is an uruguayan saxophonist; flutist and composer, graduated from the Superior Jazz Technicature (Manuel de Falla Conservatory, Argentina). She attended many workshops and residences in Brazil, New York and The Netherlands and studied saxophone, improvisation, ensemble, composition, and harmony with renowned musicians such as Carlos Lastra, Ernesto Jodos, Carlos Michelini, Tim Berne, Tony Malaby, Michael Moore, Florian Wempe, Ralph Alessi, Andy Milne, Chris Lightcap, Michael Attias, among many others. Patricia develop her own voice on the style of jazz, creative music and the fusion of Latin American rhythms, and she released “Wanderlust” (2020) her first album of original compositions with Manuel Ojeda, Ian Elizondo and Damian Taveira. She participated in several projects, recordings, ensembles, big bands as a session player and side women, and received two grants from the FONAM (National Music Found) to attend the SIM workshop (NYC) and from the MEC (Uruguayan Minister of Culture) to specialize in creative improvisation with great saxophonist Chris Cheek. 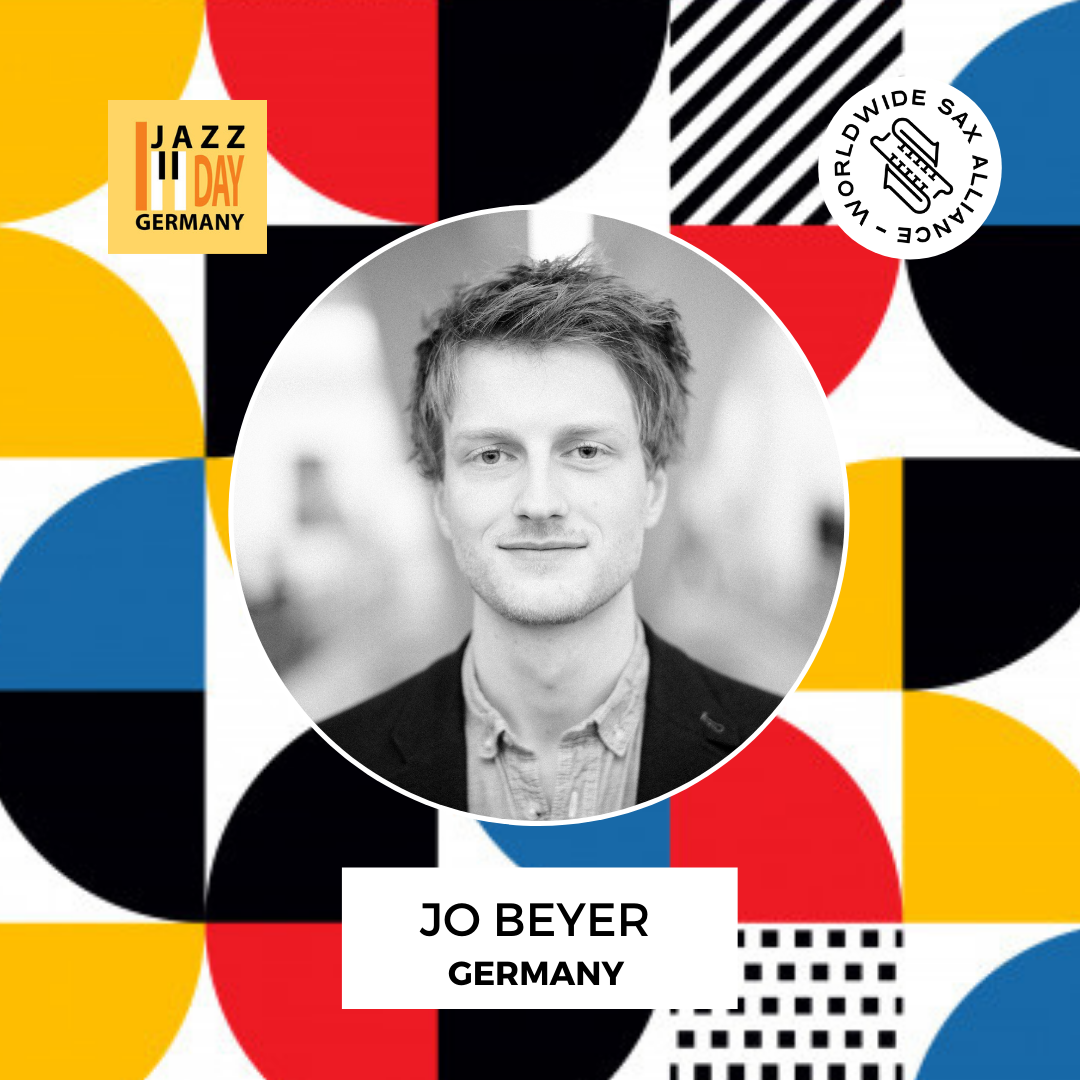 Jo Beyer (*1991) is a German drummer and composer, who reached and delighted a wide audience across the globe with his unique and energetic manner of playing drums, composing and collaborating with different musicians. As child he started playing the piano and switched to drums later on, which he studied at Hochschule Osnabruck (Germany) as well as Royal Academy of Music Arhus (Denmark). He primarily works with his own quartet JO and the trio Malstrom which has already released four albums (one with piano player Florian Weber) and played large tours all over the world. His own band JO, which he founded in 2015 and composes the music for, recently released their second album and plays with all elements of musicals parameter, which combines his unique way of playing drums and expressing his music to arrive at a very communicative and improvised interpretation as well as uncompromised fun with his own catchy compositions. He also works a lot with the extreme dynamic range of playing highly energetic music and does research in creating experimental sounds on the drumset.